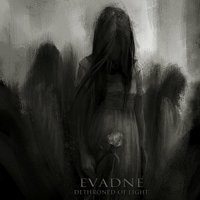 "Dethroned Of Light" is a EP limited (CD Digipack) to 500 numbered copies to commemorate the tenth anniversary of its first release "In The Bitterness Of Our Souls". This work has special guests like Natalie Koskinen, singer of SHAPE OF DESPAIR & PAARA and J.F.Fiar, singer of the Catalan bands FOSCOR & GRAVEYARD. For this occasion the band re-recorded old songs belonging to its first two works, giving them a new composition approach and improving the sound quality. This work also has the adaptation of the instrumental song "The Wanderer", belonging to the album "The Shortest Way", this time recorded with voices. For this EP the song "Colossal" was added , an advance to what would be their next album "A Mother Named Death". This EP was recorded, mixed and mastered by Sergio Peiró in SP Estudios. The cover was designed by the Russian artist Rehail and offers two large hand-painted designs with a great visual  impact.

"Dethroned of Light" is one of those gifts that all bands like ever offering to themselves and can be enjoyed by new and by faithful listeners. In the news section is remarkable the inclusion of "Colossal", a funeral wave loaded with spectacular contrasts, elegant arrangement of rope and an overwhelming atmosphere. This song is the perfect choice to open the listening, and also means a succulent advance of it is being prepared for its next album. For Evadne collectors and fans of the best melodic death/doom in general."
-La Estadea

"Evadne belongs to the best contemporary Spanish melodic doom/death bands. This band from Valencia released their first demo ‘In The Bitterness Of Our Souls’ ten years ago. To celebrate that fact they now have released this four song EP. ‘Dethroned Of Light’ consists of four songs of which opener ‘Colossal’ is a new track. It’s in the same vein of previous material by Evadne and contains beautiful melodies and heavy chord patterns. If you like atmospheric and melodic doom/death in the vein of bands like Swallow The Sun or Shape Of Despair, you should definitely try to get hold of this MCD."